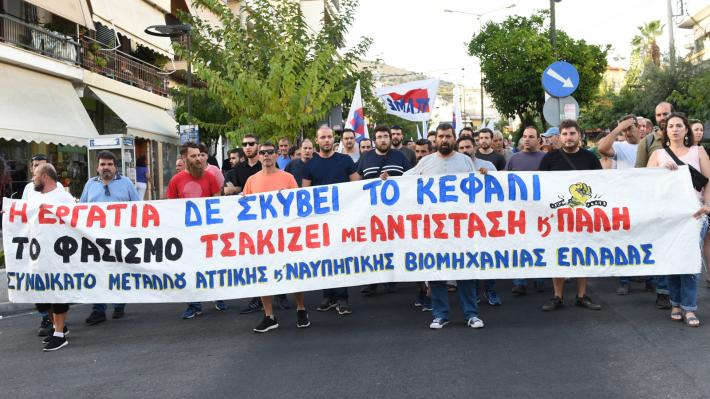 Five years since the Assassination of Pavlos Fyssas

ALL in the Demonstration on Tuesday September 18

The fascists of the Golden Dawn, the mechanism of the industrialists, the shipowners, the bankers, etc., against the workers’ movement, continue their dirty work. Five years after the assassination of Pavlos Fyssas by the Nazist criminal Golden Dawn battalion, the crime remains unpunished and the murderers are released. The SYRIZA – ANEL government and the previous government of ND – PASOK have a heavy responsibility for delaying the completion of the trial, in order to attribute the responsibilities and ultimately bring criminals to prison.

It is proven that the attack on workers’ rights goes hand-in-hand with the attack against the right to strike, as well as with persecutions and attacks on trade unionists who fight, with the repression of democratic rights, with the rise of racism-nationalism-fascism.

The response to the fascists of the Golden Dawn and their bosses will be given by a powerful working people’s movement that will demand the satisfaction of the modern needs of the people. The aim of the working class movement should be the revelation and isolation of the fascists, as the watchdogs of the bosses.

We call on the Unions, Federations and Regional Trade Union Centers to demand immediate completion of the trial of the criminal-Nazist Golden Dawn. Especially at the very moment, under the burden of the thousands of revealing documents, photographs, videos, conversations, etc. that forced Golden Dawn to fold their defensive line.

We call on every worker to join the protest on Tuesday, 18 September, in Keratsini for the 5 years since the murder of Pavlos Fyssas.