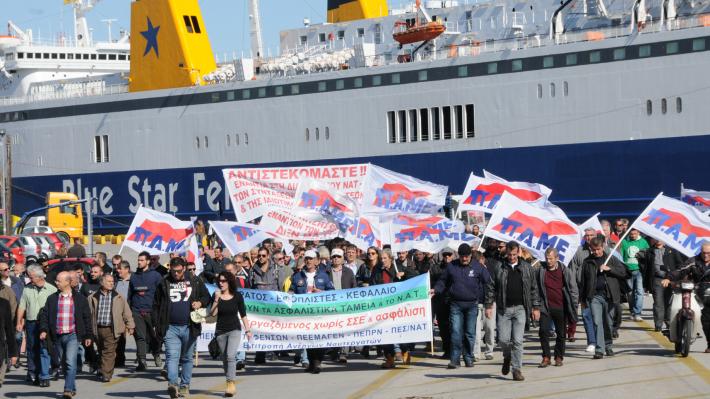 The National Strike of Maritime Workers on Monday, September 03 met great success and continues for 2nd day on September 4.

All on the side of the maritime workers

All in the Strike

The struggle of maritime workers is a struggle for all workers. The intensity of the attack by shipowners and the government of SYRIZA / ANEL at the expense of all the rights of the maritime workers, goes hand in hand with the deterioration of transports at sea, with the reduced composition of ship crews, exhausting routes and deadly work schedules of maritime workers, even undermining the safety of human life at sea. A typical example is last week’s fire at sea on the ship “EL. VENIZELOS”, which put in immediate danger the safety of human life of 875 passengers and 141 crew members.

The positive development of the maritime workers fight for better wages and restoration of rights will also contribute to the claims of workers of other sectors.

We call on workers, the unemployed, the self-employed, the retired people to express their solidarity in the just fight of the maritime workers.

To isolate the forces that once again promote “social automation”.

Our common enemy is the policy of shipowners, of the capital and their representatives, which are constantly exacerbating the living conditions of the working-people family. They step up their exploitation to increase their profitability.

We put forward our own needs