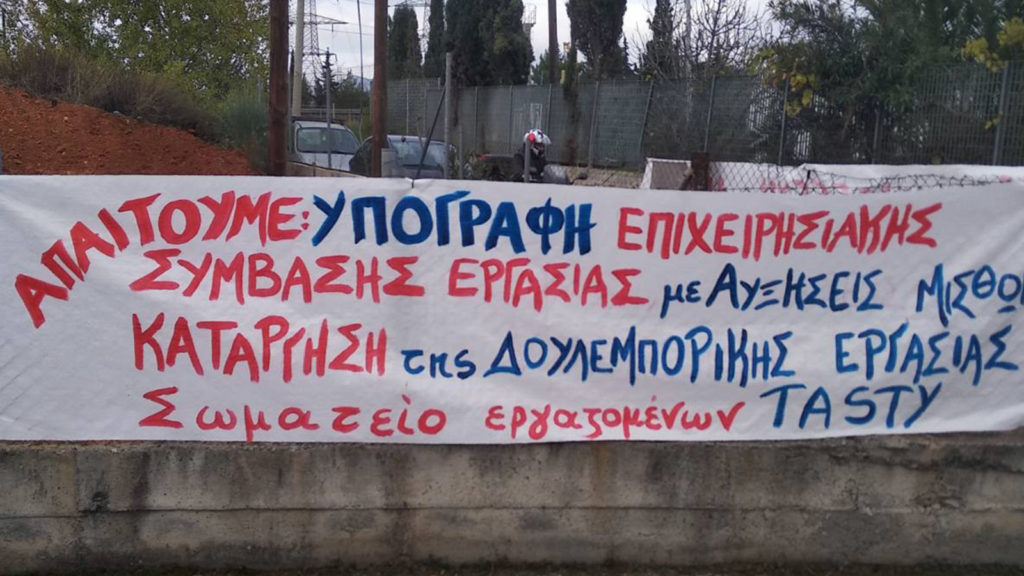 PAME welcomes the struggle of the TASTY workers who collectively and democratically, through General Assemblies and a broad debate decided with their Union to claim a Collective Contract with salary increases, abolition of “slave” forms of labor, and more. In this direction, the workers and after the employer rejected their claims, collectively decided and carried out a strike with mass participation on Thursday 18 November.

The employer of TASTY, which is a subsidiary of the multinational PepsiCo, responded to the fair demands of the workers by implementing the provisions of the Hatzidakis law that aim to criminalize the trade union action and ban strike action.

In particular, “Tasty” filed a lawsuit calling for the strike to be illegal under Article 93 of the specific law on “psychological violence”, which in practice prohibits the union from safeguarding the right to strike and legalizes strike-breaking actions and employers’ blackmails against workers who want to strike.

Citing this article, the employer notes that “the right to work of non-strikers is not guaranteed”, because the announcement of the Union calls on the workers to strengthen “the strike picket lines in all shifts”! According to the employer, “it is self-evident that the existence of strike guards/pickets (…) aims at exerting intense psychological pressure on their colleagues who do not take part in the strike mobilization (…)”

It is proved by the lawsuit of TASTY’s employer that the Hatzidaki law aims to prevent the organization of the trade union struggle and the prohibition of their action.

The implementation of the Hatzidakis law by TASTY’s employer exposes any arguments about “positive” elements, or “possibilities for improvement” of the anti-workers legislation.

The employer’s attack on the TASTY strikers is a declaration of war against all militant trade union organizations that, based on the term “psychological violence”, will be wrapped in a piece of paper whenever the workers themselves decide to claim anything against the employer!

At the time when a colleague of ours dies every 3 days because the employers do not apply the necessary protection measures, at the time when our families cannot afford the expenses till the end of the month because of starvation wages and the prices are going up in electricity etc, at the same time employers and Governments want to deny us the right to claim a better life, to deprive us of the right to collective, organized struggle.

The strike struggle of the TASTY workers has already broken the intimidating practices of the employers with massive militant participation in their strike.

Like the employees of EFOOD and COSCO with their struggles, showed that our rights are not conquered by submission but by organization and struggle. We take our lives in our hands, in every industry, factory and workplace, we intensify the struggle for Wage Increases, Collective Agreements, for the satisfaction of our modern needs. Employers’ intimidations will not pass!