PAME statement on the 49th Anniversary of the Polytechnic Uprising 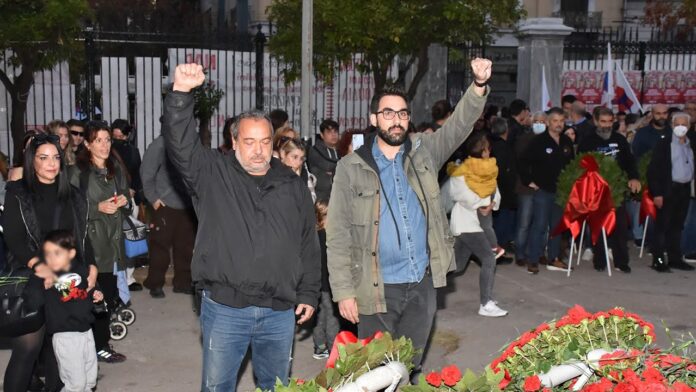 PAME statement on the 49 anniversary of the Polytechnic Uprising

The trade unions that rally with PAME, which daily, with their consistent militant positions, give continuity, a way out and a perspective to the fighting traditions of our people, greet and commemorate the 49th anniversary of the popular uprising of the Polytechnic of November 1973.

The militant legacy of the anti-dictatorial struggle and the Polytechnic uprising against the open, fascist, US-NATO, military dictatorship in Greece, and the consistent and unyielding attitude of thousands of workers, young people and women in exile, in the prisons and the torture chambers, remain a guide and inspiration for our present, daily pace.

We honour the popular uprising in the faces of the hundreds of thousands of workers and employees in the private and public sectors who, through the ranks of the trade unions, participate en masse in the workers’ and people’s struggles, in the strikes and strike rallies, against the wave of inflation that is destroying the people’s income, who demand wage increases, life and work with rights.

We do not choose imperialist camp!

The anti-imperialist slogans written at the gates of the Polytechnic and the slogan “bread – education – freedom” that flooded the streets and workplaces during the junta period remain relevant, adapted to the present difficult conditions of the working people.

The “Polytechnic” calls us to remain disobedient, to demonstrate against the war and the imperialist interventions in Ukraine, against the imperialist blocs of the USA-EU-NATO-Russia, who are murdering civilians, creating refugees and spreading poverty and hunger in many corners of the planet.

It is of particular importance today the demand for our country’s disengagement from the imperialist alliances and from the war that continues either with escalations or recessions, to stop providing “land and water” to our exploiters and their war machines, which turn the country’s infrastructure, ports and airports into “bases of war” and possible “targets”. Repeal the Greek-American Agreement on Military Bases. Out the bases of death from our country. Do not install nukes in Araxos, Souda and anywhere else in Greece.

History is written with disobedience

We are not going to settle for crumbs, for baskets of shame, for Coupons and Passes, for the corporate conglomerate’s scams. We are not going to accept paying the energy bill for their green businesses that they call ‘green growth’ to hide the huge profitability that their stagnant capital exploitation with renewables brings them. We refuse to pay for their crises, their growth, their wars

The strike of 9 of November proved that the people can come to the fore. The overwhelming participation of the workers shows the way to the conflict with the business groups and the government, in the demanding struggle for wage increases, for collective agreements, for cheap electricity and food.

Today, in the face of a system that is rotting and tragically shows its inhuman limits despite the incredible scientific and technological achievements that are multiplying around us, in the face of policies that create wars, poverty and refugeeism, the only way out is the continuous and consistent class struggle of resistance and counter-attack, our organization, the growing of struggle in sectors and workplaces.

It is the struggle that will target the class opponent, the business groups and their political staff, that is, the struggle for a society without exploitation of man by man.

This is how we honour the dead of the anti-dictatorship struggle and their struggles.

The great strike on 9 November will be continued on 17 November!

Everyone to the rallies in all cities,

in Athens, in the march to the US Embassy