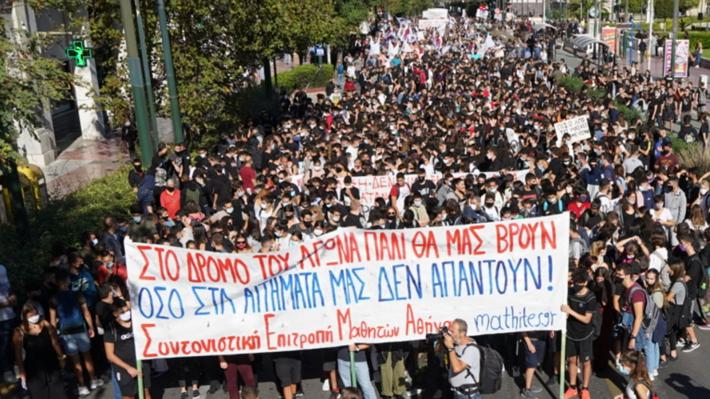 The Executive Secretariat of PAME welcomes the successful demonstrations and strike mobilization of students, parents, teachers, and public services employees on October 15.

Students, teachers, parents, public sector strikers, gave a strong response to the government’s anti-popular policy. The message was clear and strong: Our children’s struggle is ours, it is fair. Our children are not a cost, they are the future.

Together we demanded, here and now, the strengthening, shielding of the public health system, the public schools, with massive recruitment of permanent staff in health, teachers, and measures to protect the health of the people and the youth.

The government’s attempt to break the rally in Athens, to intimidate students and workers with physical searches, blockades and arrests around the rally site fell on deaf ears. All the plans and anti-workers’ laws that are being prepared to stop the fight of the Trade Unions and the popular struggles will also fall into the void.

The police violence, the unprovoked and barbaric attack that followed against 15-year-old children who demonstrated with a smile on their face and in the most peaceful way, shows not only the authoritarian downfall of the government, but also its hatred towards the working-class people. The fear that overwhelms them when they face the organized popular struggle.

The mass participation in the recent mobilizations is a message of struggle and escalation of the struggle, a task which we will fulfill.