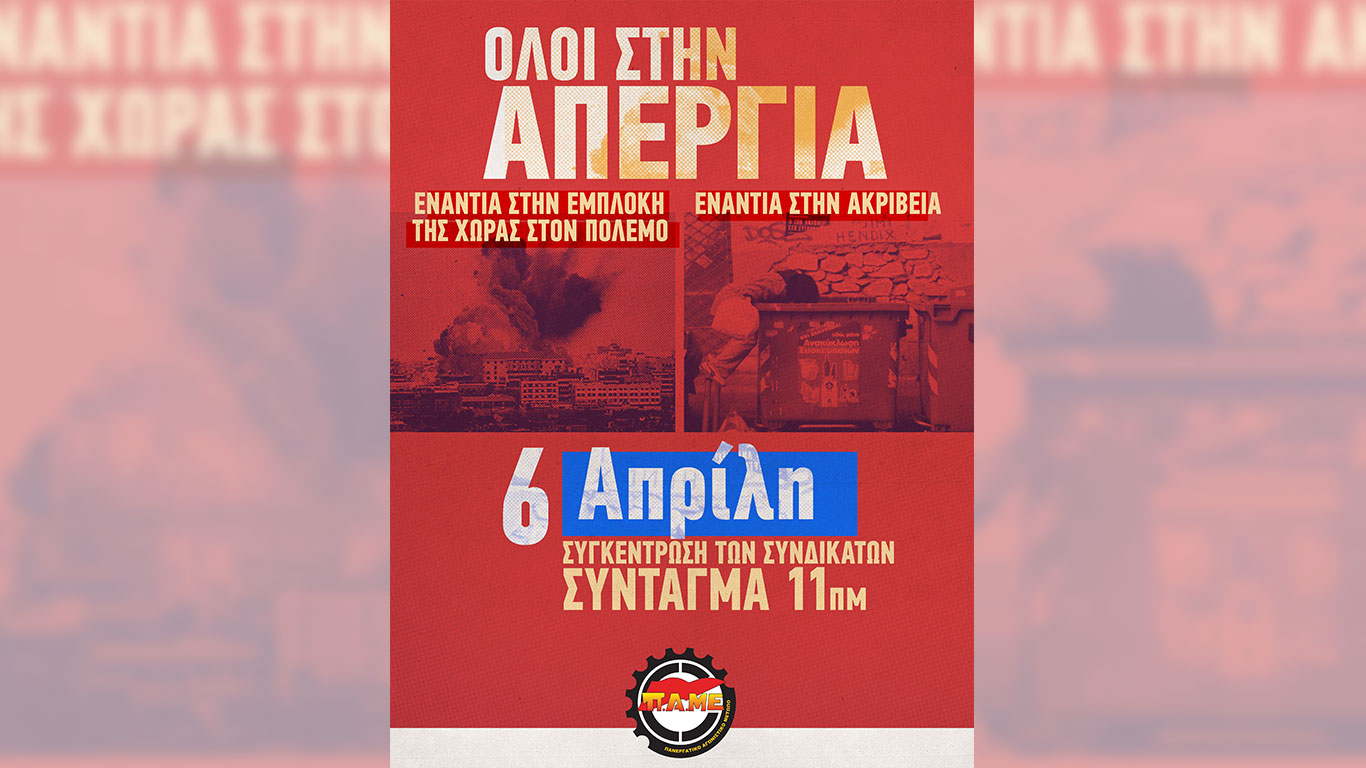 NO INVOLVEMENT-NO PARTICIPATION OF OUR COUNTRY IN THE IMPERIALIST WAR!

ALL IN THE FIGHT AGAINST INFLATION AND TAXATION

FOR THE DEFENSE OF THE WORKING-CLASS INCOME

WITH SUBSTANTIAL INCREASES IN SALARIES

The unions that rally with PAME call on the workers, all the unions, the Regional Trade Union Centers and the Federations to take in their hands the success of the National All workers Strike on April 6. Armed with optimism from the great success of the rallies on February 26 and the massive participation of the workers, we are throwing all our forces for the preparation and success of the strike.

The suffocating situation that is being created for our people, the dangerous paths we are taking with the outbreaks of war and the participation of Greece in the imperialist war in Ukraine by sending military equipment, utilizing US-NATO bases and preparing an expeditionary corps mission, require a militant response. The working people will not pay for the war. Not be in the corner, spectator, who bleeds for the profits of the bosses.

The unacceptable invasion of Russia and the war on Ukrainian territory are the result of fierce US / NATO-EU-Russia competitions over the interests of each country’s business groups, on which will control the natural resources, their transport routes and the markets.

The workers have no interest in aligning themselves with one or the other imperialist power, to be behind any robber, and serve the interests of the oilmen, the industrialists and the shipowners, the bankers, the industrialists of arms. They must not bet behind any force that kills and ostracizes workers by strangling their rights.

To keep Greece out of plans from the new slaughterhouse set up by the imperialists to redraw the borders with the blood of the peoples. The hope lies in the solidarity and struggle of the peoples.

We reject the position of the leaders of GSEE and ADEDY (the members of ETUC in Greece) who are allied with NATO and the EU and they call on us to choose the one imperialist alliance, a thief who will take advantage of the looting from the bloodshed in Ukraine. Especially the leadership of GSEE shamelessly calls on the workers to make new sacrifices for the involvement of Greece in the war and accept new burdens. At the same time that they are turning their backs on the government-employer attack for the impoverishment of the workers, while they were absent from the recent struggles of the workers of LARCO, COSCO, Kavala-OIL, E-food! Their line is dangerous in both peace and war!

Workers and unions through resolutions, general assemblies, mobilizations to demand:

Disengagement from the war under any pretext and in any way. We say no either with military equipment, with military means, or with an expeditionary corps

Do not use the Euro-Atlantic infrastructure from Greek territory for operations in Ukraine.

Close all US-NATO military bases in the country now.

We do not accept to pay or bleed for the interests of the few, for the profits of our exploiters!

We will not pay for military armaments with poverty, misery, unemployment, power cuts and unbearable bills.

We cannot accept that we pay the bills and prices increase in oil, gas, gasoline, electricity, bread, in the Super Markets so as not to affect the profitability of business groups.

We do not accept to work without collective agreements, with salaries and wages that do not cover the basic and acute needs. We cannot accept the minimum wage remains frozen at the levels of 2007!

The crumb increases promised by the ND government will not solve the big problem of low wages in Greece as underemployment and flexible forms of work prevail and with the substantial abolition of sectoral BCCs, the average wage of workers has been reduced by 25% over the last decade. All this while the purchasing power losses of employees are over 10% in the last year while inflation is running at rates of over 5% in recent months.

The responsibilities of all the parties that governed, ND, PASOK, SYRIZA are huge since they strengthened year by year the anti-popular arsenal in favor of the interests of big business.

We put forward our own needs!

The power lies in the organization of the workers. We do not expect saviors, government messiahs who will supposedly protect our lives and our rights. We do not accept any sacrifice for the interests and competitions of capital. Power is in our organization and struggle.

We call on all trade unions to meet immediately, to take part in the strike and in the strike rallies. Let the workplaces go silent and the cities be flooded from the demonstrations. To strengthen the solidarity with whoever fights, in every workplace, in every branch such as LARCO, Kavala oil, COSCO etc.

The resumption of the collective bargaining of the National collective Contract as a starting point for the increase of the minimum wage, claiming 825 € minimum gross salary

The restoration of conquests and rights such as the beginning of a more favorable contract, the Sunday holiday, the payment of overtime, the 13th and 14th salary in the public sector, etc.

The general reduction of working time, with 7 hours – 5 days – 35 hours per week and stable work with rights.

Abolition of VAT on consumer goods.

Abolition of ENFIA-House tax and big reduction of municipal fees for workers’ households.

Reduction of the price of electricity and gas by 50% and abolition of taxes on fuel and energy in general.

Debt relief, not in foreclosures and auctions for workers and poor households.

SOLIDARITY MESSAGES TO BE SENT TO

Updates on the strike at