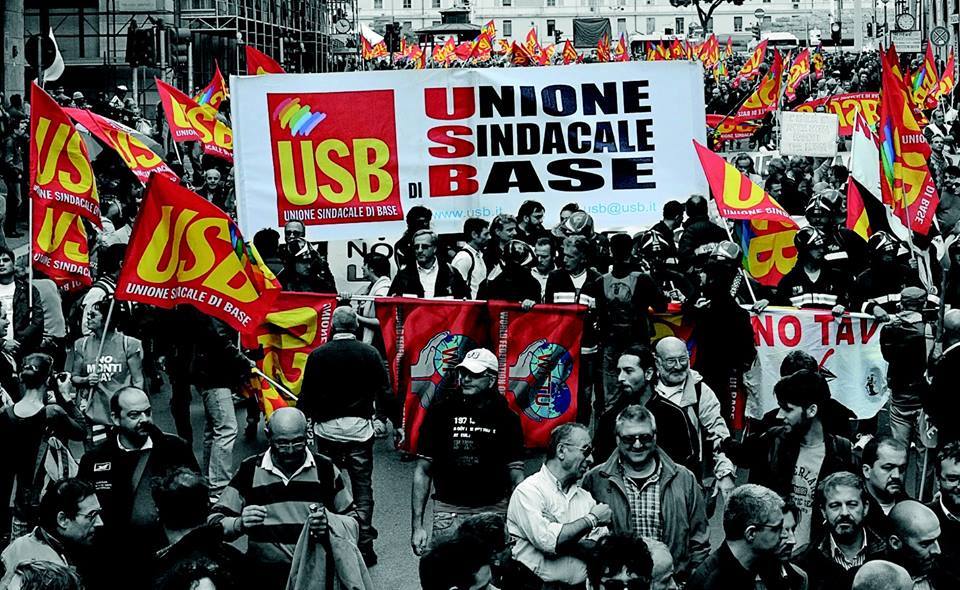 PAME sends its comradely regards and greetings to the USB and the workers of Italy on the occasion of USB Congress.

In a period of many challenges and difficulties for the workers of the world, the fight of USB and the workers of Italy is a hopeful sign for workers’ counterattack.

We take this opportunity to thank you and express our gratitude to all USB cadres for their steadfast solidarity with the workers of Greece, the dockers of COSCO, the delivery workers of EFOOD, and the struggles of the youth of Greece.

The importance of solidarity, communication, exchange of experience and the development of joint actions and initiatives between the militant trade unions of Europe and the global family of the WFTU becomes more necessary today as we experience the consequences of capitalist development, imperialist competitions and wars such as Russia’s imperialist invasion of Ukraine and the dirty role of the US-NATO-EU.

EU and Governments in the service of the monopolies are leading us to conditions of the Dark Ages, darkness and cold. To poverty, misery, war. They cultivate xenophobia, racism, support neo-Nazi fascists, attack militant trade unions, ban the right to strike. They want workers scared, disappointed, isolated. In this they also use forces within the trade unions, such as the forces of the ETUC, which for years have been cultivating illusions about class cooperation, or for the trade unions themselves to become a mechanism of the bourgeois parties to make workers support one or the other camp of our exploiters. In Greece they told the workers not to fight but to wait for the social democratic party of SYRIZA to vote for them to throw out the memoranda, but SYRIZA brought the 3rd and harsher memorandum. Having no more arguments they talk about choosing the lesser evil. A choice that has always paved the way for a bigger, more violent attack on workers’ rights.

The growth promised by the capitalists is what we are living today. On the one hand, a handful of parasites go on holiday in space, on the other hand billions cannot cover their bills, their rent, their electricity bills. They are preparing us to sacrifice our children in the imperialist wars over who controls the energy roads. They are asking us to choose between imperialist Russia, which arrests and imprisons militants, and the Ukraine of the fascist Azov battalion of Zelensky, who has banned all trade unions and opposition parties. They have gone so far as to present the US-EU-NATO as defenders of peace. But we do not forget their crimes in Yugoslavia, Syria, Libya, Mali and Yemen. We do not forget that even today they are murdering the children of Palestine. We do not forget that these so-called ‘progressives’ like the Spanish Prime Minister Sanchez who murdered dozens of migrants in Melilla in cold blood.

We do not forget that whoever has been in government in Greece in recent years has turned the Aegean into a graveyard for refugees, built and maintained concentration camps for migrants. They have attacked trade unions, beaten and arrested workers. Every form and shade of government was tried in Greece. The answer is one. ONLY THE PEOPLE WILL SAVE THE PEOPLE.

This conclusion is confirmed by the experience of the workers of Italy during the pandemic, when only USB took the initiative to stand up against the Governments that demanded the people to submit and pay the consequences of the privatization and dismantling of public Healthcare. Your vanguard action stood as a bright example for all workers of the world.

Similarly, the class, internationalist stance of the cadres of USB in ports and airports against the transfer of military armaments is a great act against imperialist barbarity for peace and friendship of the peoples.

These few examples and many more are the reason why USB is targeted and attacked by the Italian state, the employers and the media of Italy. Because it stands in the front line of the struggle for the rights and interests of the working class. A stand that is of great value for all workers of the world and that is why PAME has always been by the side of USB and was always ready to defend and support your struggles and activities.

Together we can Win!

The workers we have the power, we can overthrow them. With organization, with solidarity, with class struggles.

By massing our unions, by isolating the logic of waiting and class cooperation, with daily presence and action in every workplace, with self-sacrifice and selflessness.

PAME expresses its solidarity to USB and best wishes for its congress!