PAME Greece Solidarity with the Strike of STARBUCKS workers 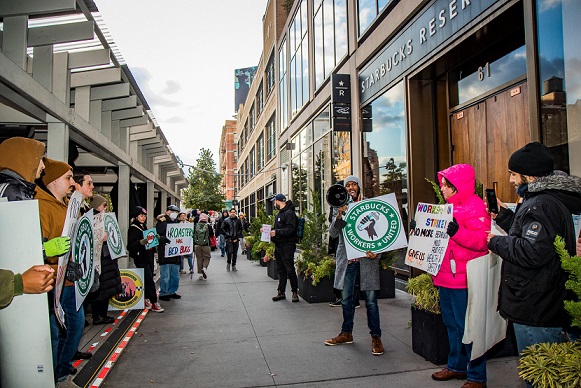 PAME that represents the class unions of Greece, expresses its solidarity with the strike that started in 100 stores of the multinational STARBUCKS in the USA where the workers are demanding wage increases, better working conditions and an end to the multinational’s union busting attacks against the collective action of the workers and their trade union organisation.

The thousands of STARBUCKS workers, the majority of whom are young, women and migrants, like all workers in the industry, face massive exploitation, abusive employer behaviour and intimidations to the point of not being able to pay for the food and coffee they serve to customers. With such sweatshop working conditions, taking advantage of the antiworkers laws imposed by the governments that serve them, empires like STARBUCKS are being built.

But workers in many countries have shown that with collective organization and action, with the power of solidarity, they can bring even the strongest opponent to its knees.

In the just struggle of the STARBUCKS workers, the forces of the WFTU in the USA stand with them. And from Greece PAME stands by their side and expresses its solidarity