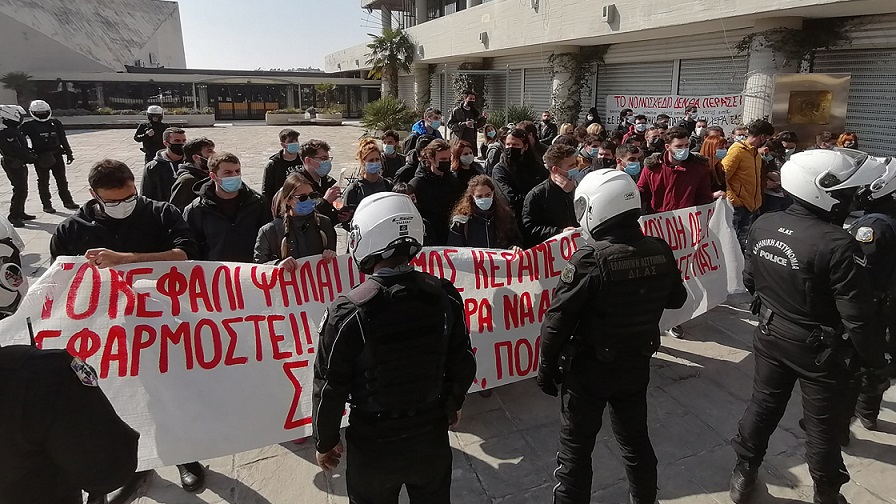 PAME denounces the violent Police attack against students who protested for their rights in Education which took place in Thessaloniki, on Monday February 22.

This development reveals the hypocrisy and the real plans of the Government. At the Aristotle University of Thessaloniki, a university that has been closed for a year, at a university where the scientists of tomorrow have not seen their faculties work for a year, Police forces attacked protesting students to ensure “smooth operation” of the University.

Government and University Authorities treat the teachers, the doctors, the architects of tomorrow, as criminals!

It turns out that for the Government crime is to defend Free Education. That is why it sends the police to keep the Universities closed and proceeds with violence and repression against students who want to study! It proceeds to open suppression of the collective processes of the students.

With their law and intimidation, they want to impose a university-Corporation, a university where knowledge and science will be a commodity, without annoying voices claiming Free Education for a better tomorrow for the people.

The class trade union movement, the militant student movement, has responded to violence and repression in more difficult times. The government fools itself if it thinks it will put a stop on peoples´ struggles.

PAME, the class workers movement supports the struggles of its children. We will not accept the transformation of the pandemic into”quarantine” against the people´s movement.

Release all the detained students and open the schools with the necessary protection measures.

The Police-Law of the Government Out of the Universities