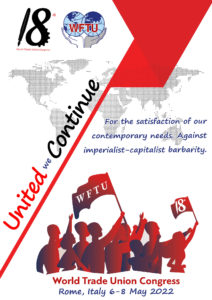 On Tuesday and Wednesday 1-2 February, was held the Online Meeting of the Presidential Council of the World Federation of Trade Unions (WFTU-FSM) on the subject of the 18th World Trade Union Congress.

The meeting decided the Congress, which had been postponed due to the pandemic, to be held on May 6-7-8 in Rome, Italy with the support of the USB trade union under the slogan “United, we continue! For the satisfaction of our contemporary needs, against imperialist-capitalist barbarity!”

PAME expressed the importance of holding the Congress, despite the adversities and difficulties, which confirms the steady and uninterrupted action of the WFTU and the class unions internationally in all conditions in the frontline of the struggle for workers’ rights. The 17th Congress was organized in 2016 in Durban, South Africa, while the 16th was hosted in 2011 by PAME in Athens.

The meeting also approved the registration of new unions in the WFTU from Argentina, Colombia, France, USA and other countries. WFTU today represents 105 million workers from 133 countries on all continents.