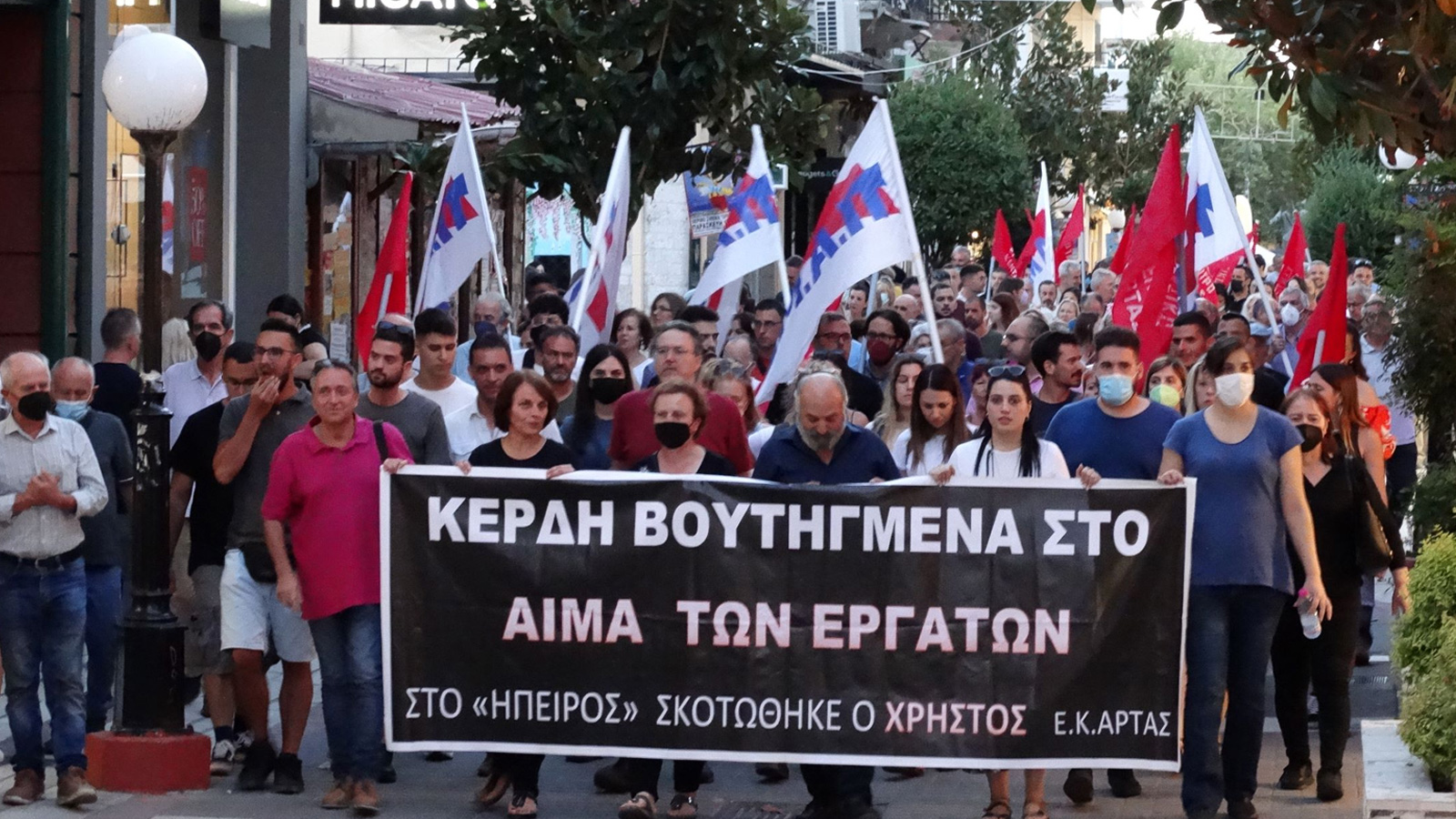 The Regional Trade Union of Artas and the people of the area sent a strong message against the brutal exploitation of workers that leads to deaths and accidents.

On the occasion of the trial against the company Epirus SA for the death of the 29year old electrician, Christos Zorbas, who was killed by electrocution during his work on June 6, 2020 the Union held one of the biggest demonstrations held in the city.

During the trial the employer of “Epirus SA” claimed that on the one hand it is not obliged to install escape relays in every electrical panel, and on the other hand that Christos Zorbas did not use the cleaning gloves provided by the employer, which supposedly protected him from electrocution, so he himself is responsible for his death.

Against these tactics the people of Arta gave a strong, militant response. The presence of the youth of Arta was overwhelming, sending a thunderous message against the cover-up of the employers’ crime. Among the hundreds of young people, friends and relatives of Christos, colleagues from the food factories of the region. The family of Christos Zorbas, mother, father, sister were at the head of the large march that followed in the streets of the city.

“Profits bleeding workers’ blood”, read one of the banners of the Regional Trade Union of Artas, highlighting the real culprit of the employer’s crimes, while placards condemned the attitude of the employers.

The big rally noted that

“The unjust death of Christos Zorbas is not an isolated or random event, since only in the two years 2017 – 2018, based on official data in Greece, were recorded 10,290 dead and crippled workers…

the ongoing trial is a tragic occasion to highlight the efforts made by the employers to abolish any notion of responsibility for health and safety measures at workplaces, which were won through decades of struggles by the labour movement.  The employers are making efforts to get rid of their obligation to ensure protective measures because they are a cost and an obstacle to the profitability of capital… they are trying to consolidate a perception that measures in every workplace are the responsibility of the workers and are included in their wages…

Our gospel was carved out of a red line left behind by our dead colleagues.

Our stance is simple. No step back. Because behind lies life itself, the very physical existence of the working class… the employer of ‘Epirus’ is condemned by us, to be condemned now and in court

On Tuesday December 6, transport unions from Greece met at the offices of PEMEN...
Unions

Health workers, along with dozens of workers' unions and mass organizations, demonstrated to demand...
Unions

On Monday, November 28 Doctors and healthcare workers of Public Hospitals held their 1st...