You are at:Home»English Categories»News»PAME»Strikes by Regional Unions of Lesvos and Samos against EU-Greek Government brutal policy against Migrants-Refugees and islanders

The last days the islands of Aegean, who have been the center of the refugee-migrants issue the last years, suffered a brutal attack from the oppression forces of the Government, as they demanded the end of the concentration camps. The local unions have been in the front line demanding real measures of protection and assistance to the refugees, as well as support to the local communities, who witness their land turn into huge EU’s Guantamos.

The government responded with “invasion” of Special Forces of the riot police in the islands, with armed vehicles and water cannons. The people of the islands guarded the harbors against the police. The police attacked the people with chemicals, teargas, flash grenades etc. turning the islands in war zones.

The ND Government revealed once more its oppressive face, trying to impose its oppressive plans. We call the people of Lesvos to stand up against the policies of the Government who sends Riot Police to escalate repression and suppress islanders’ resistance.

We are on Alert

The Board of Samos Regional Trade Union, PAME affiliate, stated

“In an extraordinary meeting that took place on February 25, following the unprecedented and barbaric attack -ordered by the government- with chemicals, tear gas, water cannons and Riot Police against the people of Lesvos, Chios etc who are fighting to keep our islands from becoming “concentration camps” of the European Union, the Union:

1) Condemns and denounces the ND government, which, trapped in the impasse of its own refugee-migration policy, does not hesitate, in reminiscent of the dark moments of our history, to order the repressive forces to operate and act as invading forces; and bloodshed those who are struggling to keep our islands from becoming prisons of the miserables.

2) The Union calls for General Strike in the Islands of Samos-Ikaria from 12.00 to 16.00 on Wednesday, February 26, 2020 and invites the workers and the people to participate in the Strike Rally at 12.30 in Pythagoras Square. 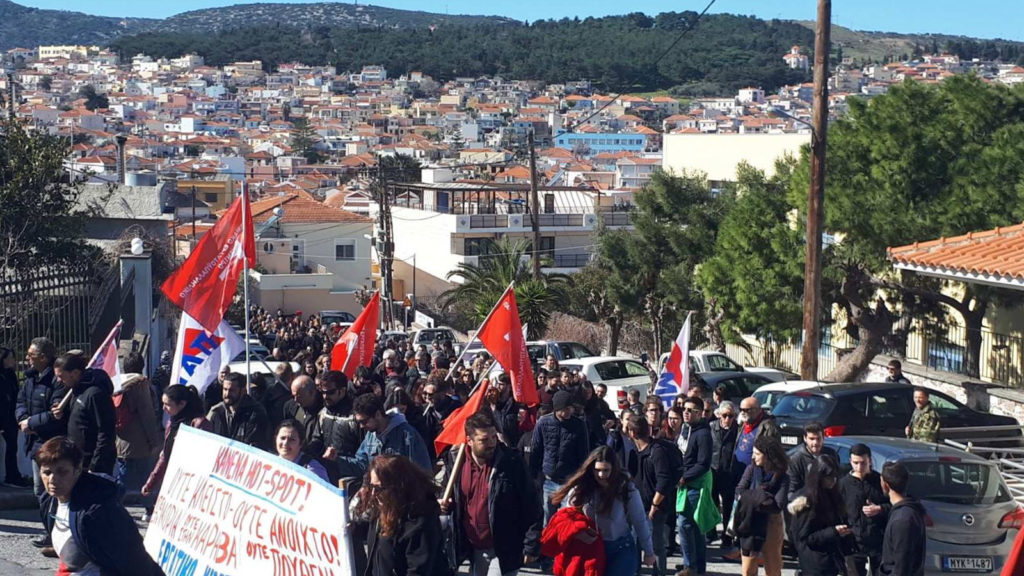