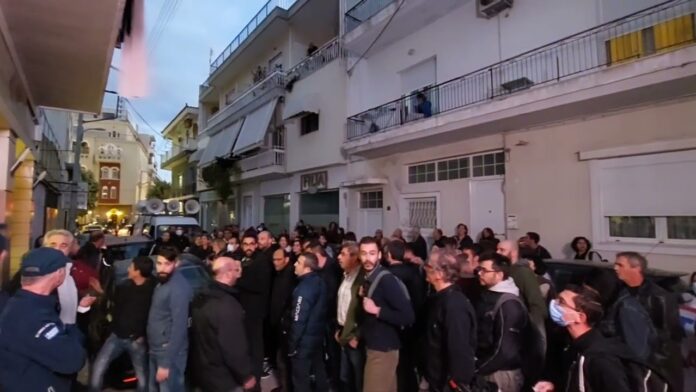 The class unions of Athens held a militant protest in front of the private education institution PROTOPORIA on Tuesday November 22 denouncing the layoff of the President of the Union of Employees in Private Education of Athens, Elpida Nassiopoulou.

The Union denounced the dismissal, which was based on the grounds of “misconduct” because after the announcement that the school in question was to open on 17 November, the unionist responded to the employer that this day is a holiday for Education and the schools are closed and spoke to the students about the Polytechnic Uprising of November 17, 1973.

“Our strength, our solidarity must be expressed in all ways,” said G. Perros, from the PAME Secretariat, which from the very first moment denounced the dismissal. As he stressed among others, the workers, the people’s movement in this way will give their answer and called for massive solidarity and condemnation of the layoff of the President of the Union of Employees in Private Education of Athens and demand the cancelation of the layoff

On the occasion of the International Day for the Elimination of Violence against Women,...
PAME

Important Success of the class Unions against the Banks

While the Greek Government and the Banks are planning a massive attack with seizures...