Solidarity to the courier workers of the Italian Post Office 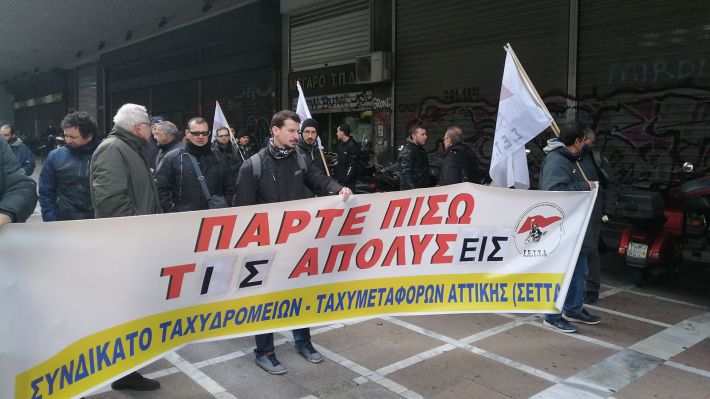 The Postal Workers Union of Attica (SETTA), the ACS Union, the SPEEDEX Union, and the UNION DHL EXPRESS HELLAS, denounce the violent attack by police forces in Rome against the courier colleagues of the Italian Post Office, who are on strike against the dismissal of 17 colleagues!

Our colleagues in the Italian Post Office who fight for their jobs and find themselves unemployed are treated like common criminals and at the same time those who sack them are getting rich.

In both the Greek Post Office (ELTA) and Geniki Tachydromiki, the workers have been confronted with the attack of the employers. In ELTA – ELTA COURIER, while we were fighting with 24-hour and 48-hour strike for the defense of our rights, for permanent and stable work, the management of ELTA and ELTA – COURIER responded to our just demands with police forces. Respectively, in Geniki Tachydromiki, the employer’s impunity has no end, they send the police whether the workers mobilize or strike, even reaching the point of sending the workers to the courts to apologize for defending their rights!

At the same time, the dismissals of temporary workers in the ELTA-ELTA COURIER group continue month after month, the intensification of work is running red, the persecution of trade unionists in Geniki Tachydromiki has become a status, the Health and Safety conditions in the premises are unacceptable!

The struggle, the organisation in our unions is a one-way street

Solidarity is our weapon

The Postal Workers Union of Attica (SETTA), the ACS Union, the SPEEDEX Union, and the UNION DHL EXPRESS HELLAS, express our full support for the just strike action of the courier colleagues of the Italian Post Office. We denounce the brutal attack by the Italian police that resulted in the serious injury of 2 workers and we express our solidarity with the struggling workers and USB Italy.

WE RESIST ALL FORMS OF REPRESSION

WE WILL NOT TOLERATE LIVING IN POVERTY AND MISERY!

WE DEMAND HERE AND NOW REAL INCREASES IN OUR WAGES