The National Union of Musicians of Greece, member of PAME, took the initiative to organize a big e-concert in support of Art Workers, Singers, Musicians, Actors of Greece. Some of most important musicians and singers of Greece will take the stage in the Athens Concert Hall and perform online in a fundraising event for the Solidarity Fund of the Union on December 13, 21:00 Athens time. In its statement the Union noted:

We Unite Our Voices with the People Who Fight

We Strengthen the Solidarity Fund of th eUnion

“…. For The Bread, the Light and the Song of the People!” -Giannis Ritsos

The National Union of Musicians of Greece takes a special initiative to hold a very large concert, adapted “online” due to the circumstances.Through this concert we unite our voices and our melodies with the people who do not give up and continue to fight!The mask protects us, but does not silence our heart, mind and voice. Our struggles cannot wait, because neither can our survival.

We demand that substantial measures be taken to strengthen the Public Health System, by hiring permanent staff. Especially for this critical moment we live in, it is necessary to order the requisition of Private hospitals and private doctors, so that we do not mourn other victims because there are no ICUs. We demand to ensure our survival, without exception, so that we do not go a century back to our collective and individual rights.We demand to be paid with dignity from our work so that we can make a living from it, as well as our right to free time. In our life!

In this context, this special big concert takes place, opening a wide dialogue with the whole society, especially at these moments when the need for culture is so great!

Artists and industry workers are living in an unprecedented situation. The vast majority of us are at a dead end and unable to survive. Our Union from the first moment with the contribution of colleagues set up a network of solidarity and support that needs to be further strengthened. Everyone will be able to watch the Concert with their contribution to the Solidarity Fund of the Union, choosing between the amounts of €3, €5 or €10, depending on the support they wish and can offer for the Solidarity Fund.

The initiative will include Manu Chao’s song «La vida tombola» performed by Argentinian footballers in Greece, in honor of Diego Maradona

The concert will be televised by the Greek National TV-ERT, in a later date.

In the concert will participate 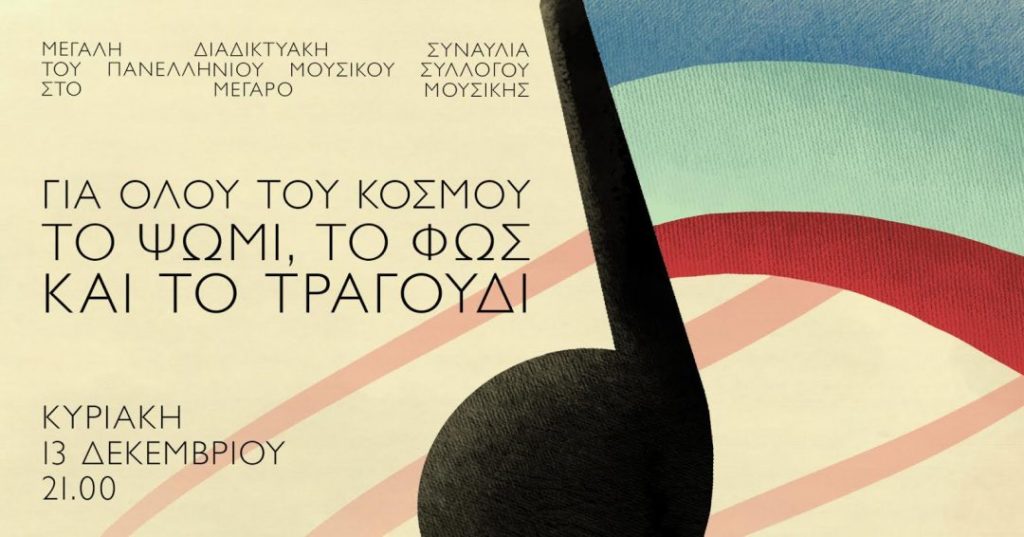