On the escalation of the attacks against Workers’ Strikes 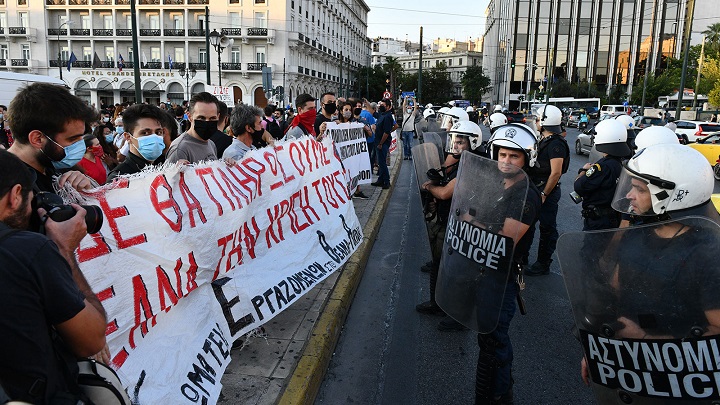 The last 24hours employers and the Greek Government moved to 3 more actions to block the anger and indignation of the workers. Anger which is growing under the anti-workers’ policies being imposed.

Filing of restraining order against the strike of the workers of EODY Refugee Centers, who among other things demand the immediate payment of their unpaid accrued wages from November 2021

Declaring illegal, the strike of the workers of the TITANIA hotel who demand the cancelation of dismissals, the safeguarding of their jobs and wage increases

And also, on the same day the government sends to court the workers of the Athens Urban Transport (Metro, Buses, Tram, etc) who are striking against the privatisation of public transport and its transfer to the private companies

The attempts by the state and the employers to have workers’ strike actions declared illegal are not unconnected with all the mechanisms that have been set up and are expressed in all kinds of militant actions, with courts against demonstrations, students’ protests, farmers mobilizations and “strike courts”.

For the state it is illegal and abusive to demand your wages.

For employers it is illegal and abusive to ask for wage increases when their profits this year have exceeded all precedents.

For the government, it is a criminal offence for students to demand schools without police, it is illegal for health workers to demand public healthcare and for NHS workers to demand their accrued wages. It is also illegal to demand humane working conditions and steady employment with full rights in an important sector such as public transport.

And yet, the efforts of those who want to freeze every militant demand will continue to fall on deaf ears. They are in fact nullified not only by the ever-increasing needs of the workers who are unable to be satisfied by policies hostile to their interests, but also by the correspondingly increasing solidarity that every struggle, large and small, now meets. A solidarity that will escalate not only by supporting those who rise up, but also by organising sectoral and industry based struggles even where they are not expected.

Because the best support for a struggle is none other than universal resistance to those who bring us poverty, inflation, unpaid work and layoffs. We call on all unions to organise struggles now, based on our needs, in every region and workplace. Workers can overturn the plans of the government and big employers.  With confidence in our strength, we set our steps and escalate to the national General All-Workers Strike on November 9.

HANDS OFF THE STRIKES

HANDS OFF THE UNIONS

PAME expresses its solidarity with the workers of Italy and the USB for the...