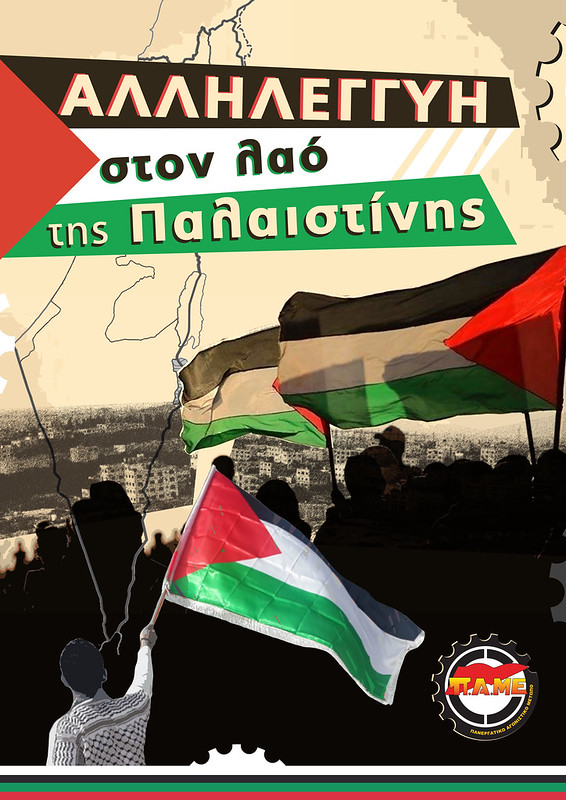 On the occasion of the November 29 International Day of Solidarity with the Palestinian People, PAME calls on the workers and trade unions of Greece to continue their constant solidarity with the heroic people of Palestine against the murderous Israeli occupation.

The crime continues.  The Resistance does not stop, solidarity will grow stronger.

The class trade unions of Greece condemn the imperialist barbarity of the murdering state of Israel and with new actions and initiatives we will strengthen our solidarity with the just struggle of the people of Palestine. We denounce the selective and hypocritical sensitivity, the double standards of the imperialists of the EU-NATO-USA and the governments who, while supposedly caring about human rights, the children victims of wars, the women who are oppressed, suddenly remain silent when these crimes are committed by the Israeli army, when the hand that strikes a woman is Israeli, or when the child who is killed was born in Palestine.

We do not forget. We continue steadfastly and unwaveringly on the side of the people of Palestine, until the final victory!

For Palestine Free and Independent on the borders of ’67!

Immediate release of all political prisoners in Israeli prisons.

To stop all political-economic-military cooperation of the Greek State with the murdering state of Israel.