Militant Action of Solidarity with the Refugees Against Imperialist Barbarity 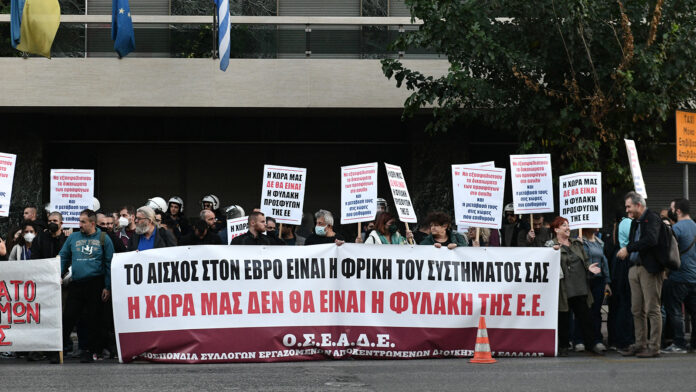 A protest rally was held yesterday at the EU offices in Athens by the class unions and organizations, for the disgraceful situation with 92 refugees left naked in Evros Greek Turkish Borders.

“The disgrace in Evros is the horror of your system, our country will not be the prison of the EU”,

as well as, “Solidarity with the uprooted. Struggle against the rotten system and the policies of the EU – governments that devalue human life for the profits of the bosses”. The slogans were characteristic: “NATO – Brussels killers of the peoples, down with the new class of imperialists”, “Killers, thieves, hypocrites are the European imperialists”.

In his address, Pavlos Alexandrakis, secretary of the Athens Construction Workers Union, stressed, among other things, the following:

“Colleagues, we are outside the EU offices. We are here to remind them how rotten they are. Their policies are full of stench and making people sick. A few days ago we saw on the TV screens 92 refugees naked at the borders. We lowered our heads in shame. The images of the dead babies, of the women dead in the Aegean Sea had not yet been erased from our memory. (…) They are the ones who, in Brussels in the last few days, pretended to cry for the 92 refugees, the ones who, through their policies, in order to serve the business groups, are waging imperialist wars and creating uprooting, poverty and misery. They are the ones who have filled our islands with NGOs that profit from the suffering of all these people, the Land of the Damned. We are here, the trade unions, because we can’t take any more.

We call on the Greek people, the workers, to show resistance, not to accept these images. To show the solidarity that we need today and that will be shown in the strike on 9 November…

So we tell them clearly. Both in the EU and in these governments, whether they are on one side or on the other, Erdogan and all these exponents of imperialist policies, that they will find us against them. We continue!”.