The class unions of Thessaloniki, unionist teachers of PAME, students’ unions and peoples’ associations gave a militant and decisive response to the new fascist attacks that took place the last days in schools of Stavroupoli neighborhood in Thessaloniki.

Fascist groups, with the tolerance of police forces and local school authorities attacked pupils and students who protested their presence and the attempts to cultivate fear and spread the fascist poison.

On Wednesday morning unions and youth rallied outside the school of Stavroupoli to express solidarity with the students against the fascists. The fascist groups attacked and injured two young pupils, while the police forces allowed them to use the school as center of their action throwing rocks and molotovs to the union protest. Additionally the police used tear gas and tried to break the antifascist protest.

PAME condemned the State for the cover it gave to the fascist action and called for massive response to the fascist poison, which resulted in thousands demonstrating in Stavroupoli in the afternoon under the slogan “Fascists Out of our schools and neighborhoods”

At the head of the procession was the banner of the Coordinating Committee of Students of Thessaloniki, which read: “Student blood… by a fascist? That’s enough! “Fascists OUT of our schools.” 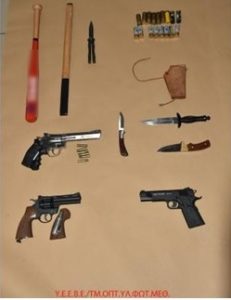