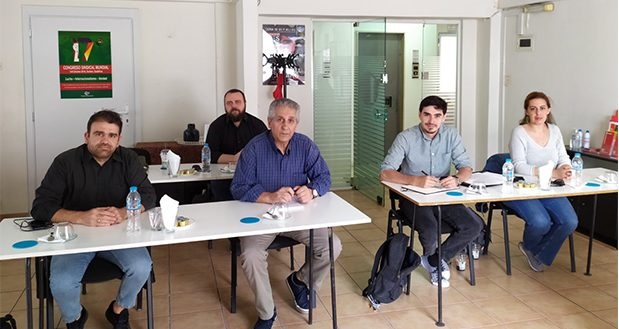 A delegation of the Trade Union of Hotel, Tourism and Catering Workers of Athens, headed by its president, comrade George Stefanakis, and composed by comrades Nikos Theodorakis, head of the International Relations of PAME, Antonis Lakiaras, Vice president of TUI HOTOUR and coordinator for Europe and Ralli Lina, organizational secretary of the union, visited the headquarters of the World Federation of Trade Unions on 26th May 2020.

The delegation met the WFTU General Secretary, comrade George Mavrikos and comrade Petros Petrou from Cyprus and they discussed the developments and challenges of the workers in the Sector in Greece and Europe, exchanged experiences and thoughts for the coordination of the struggles of the class-oriented trade unions in national regional and sectoral level.

The World Federation of Trade Unions, representing more than 100 million workers in the 5 continents, expressed its solidarity with the Trade Unions of Hotel, Tourism and Catering Workers  of Athens and Greece, supporting their militant initiatives such as the demonstration that is going to take place on May 28th 2020.