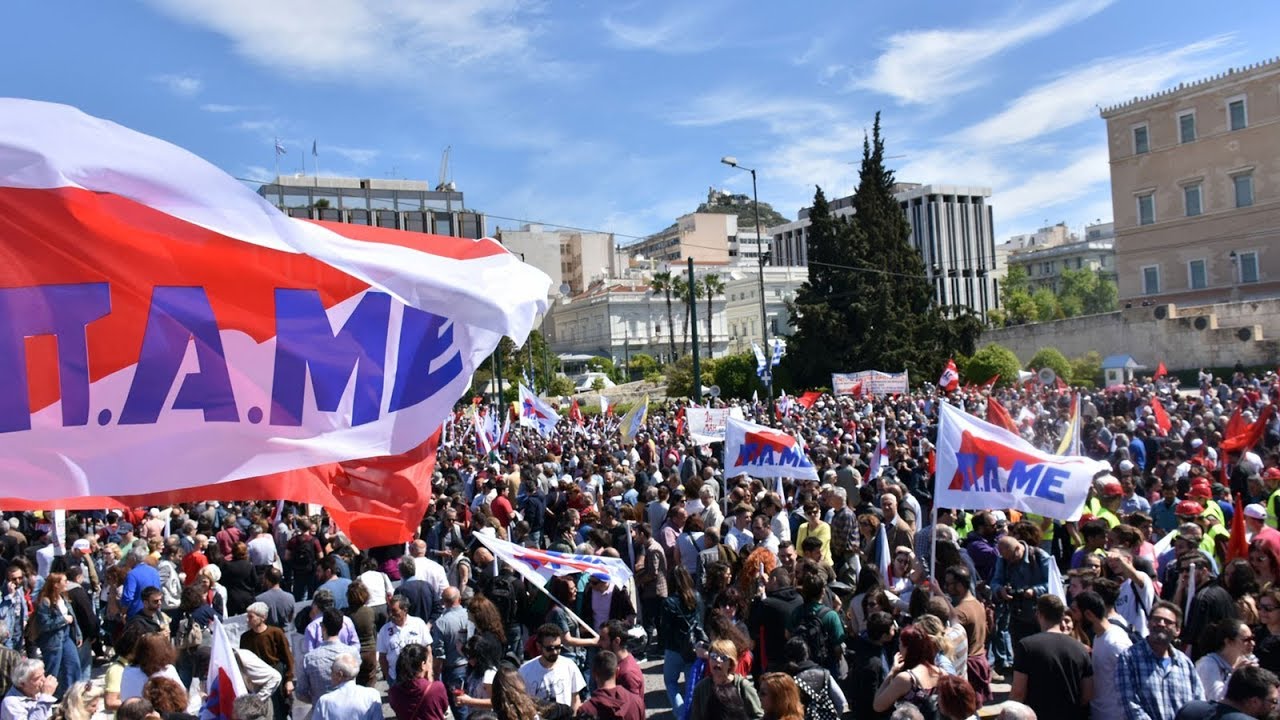 ALL in the struggle! All in the GENERAL STRIKE on November 9!

NO TOLERANCE –NO WAITING

FOR THE OVERTHROWING of the anti-people’s policy that generates poverty, hunger, exploitation and wars, that leaves the people freezing so as to warm the profits of the business groups

FOR THE DEMAND for substantial increases in wages and pensions, for collective agreements that guarantee stable work with rights, for electricity and basic goods cheap for the people

We don’t let the bills running and the stress of survival drown us! We stand up now against the business groups, the government, the EU and all the institutions of the system of exploitation, the modern vultures that call us to adapt to poverty, hunger, cold and ultimately death!

Soon they will give us life coupons

At the same time that 7 out of 10 workers have cut back on several food items, 47% think it will be hard to make ends meet in winter because of the poverty and the annual cost of electricity has overpassed 2 months’ salaries, the big business groups in energy are throwing a party of profits.

In these circumstances 39% of workers say they work overtime of which 48% say they work more than 7 hours a week overtime. 49% of them state that they are not paid for their overtime work.

The situation with basic necessities’ prices is out of control! Working-class families are having their incomes raided by double-digit increases on supermarket shelves. According to forecasts, prices in 35 basic product categories will rise again in the next two months.

On top of all this, the government, celebrating capitalist growth that exceeded 7.5% in Greece in the last quarter, is giving workers a “dividend” in the form of certain allowances that will be wiped out in the first week due to the huge increase in inflation.

Life itself confirms that the policy of allowances and “moderate increases” of the GSEE (member of ETUC in Greece) cannot solve the growing problems of the people. And at the same time they are finding billions of euros from the state budget to support war interventions, opening the vaults for the purchase of armaments and weapons. They call on the people to live on electricity rationing, to learn in controlled darkness, to lower the temperature on the thermostat in order to advance the green growth goals set by the EU and the big business groups.

These anti-peoples’ policies implemented by the New Democracy government today, as in the past by the SYRIZA and PASOK governments, seeks to lower the demands of the workers and to put the blame on workers’ demands that claim our modern needs.

No trusting to unionism controlled by employers and governments, in the GSEE and ADEDY (members of ETUC in Greece). They have played an active role in the attack we have been under over the years, in the lowering of workers’ demands. They act and intervene to cultivate within the workers the position of the “strength of the economy” and the competitiveness of business groups. They are advocates of “social partnership” and “social dialogues” that lead to our defeat. No one should be fooled by the maneuvers they use to convince workers that they are “independent” of their parties when they implement their anti-peoples’ policies. They don’t fool anyone anymore.

No waiting – everyone in the struggle

No waiting and no tolerance to the anti-peoples’ policy and the “saviours” who promise us again pre-election solutions to our problems. The experience we have gained from our would-be “saviours”must leave no room for new illusions. It will be hurtful any waiting that would integrate the struggles into any mechanism for governmental change, to passively watch the developments in the pit of promises and false hopes.

We must not allow our anger, our indignation to be exploited to reshape the political scene with the same or new materials by the political forces that have contributed to the attack on workers’ and people’s rights.

The struggles in Cosco, E-food, Larco, in Fertilizers and Oil of Kavala, in the Construction Workers, in the Shipbuilding Zone, in Malamatina show the path we must follow.

Only our own militant action, the growth of solidarity, our organization can give a positive outcome for our demands and our lives!  Only our active intervention in the workplaces, in every workplace can bring substantial results with increases, with real relief for the working people!

It’s neither modern nor worth our while to think about turning on the air conditioner, the water heater, whether to put on oil, whether to plug in the stove. They seek to turn us to the mangals of death, to adapting to the cold.

Behind every labor problem and impasse, behind poverty, inflation, repression, foreclosures, war, the cause remains the same and unchanging. It is the unending thirst for profits of the business groups! That is why they protect in these conditions the profitability of the energy black marketeers, and at the same time they escalate the intensity of exploitation and repression.

We are not ‘adapting’! We are fighting to live!

825€ minimum wage in the private sector, 20% increase in the public sector

Collective agreements and wage increases based on the increase in inflation.

Restoration of the principle of the most favourable contract, of the post-contracts principles etc

We call for a militant solidarity and uprising of the trade unions and the mass organizations of the self-employed in the cities, the poor farmers, the scientists, the students, the women.

On November 9th, the whole country must come to a stop

Big reduction and cap on the price of electricity and gas.

Abolition of the Special Consumption Tax and VAT on oil, petrol, gas and electricity.

Big reduction and cap on prices of basic consumer goods such as food (e.g. milk, flour, oils, fats), clothing and so on.

No workers’ and peoples’home without electricity, water, telephone. Cancellation of debts for working-people households and self employed.

Broadening the criteria for inclusion in the Social House Tariff and the heating allowance, increasing the family income criterion to 30,000 euros.

Restoration of free public transport services for workers at the beginning and end of shifts, 50% reduction in the price of public transport tickets. Free transport for pupils, students, the unemployed, the disabled and pensioners.

Abolition of business tax for the self employed.

Cancellation of debts to banks and tax authorities.

The power lies in mass organization and class struggle

With determination, with militancy and with a general strike uprising to make our anger a force of claim and hope. The mass struggles and big strikes in many countries such as Great Britain, France, the Netherlands, Spain, Germany, Belgium, the USA etc. show that the pot is boiling. These struggles are something promising. They show that the working class has not said its last word and that the people will write their own history, their own developments.

We call on the collective organs of the trade unions without any delay to start the engines of struggle, with meetings of the Boards, with general assemblies, with multiform action and initiatives to reach every worker, in every office, factory, workplace, ship, neighbourhood, everywhere.

To protect our lives!

Doctors and Healthcare workers are on 2nd day of Strike on Tuesday, November 29...
PAME

On the occasion of the International Day for the Elimination of Violence against Women,...