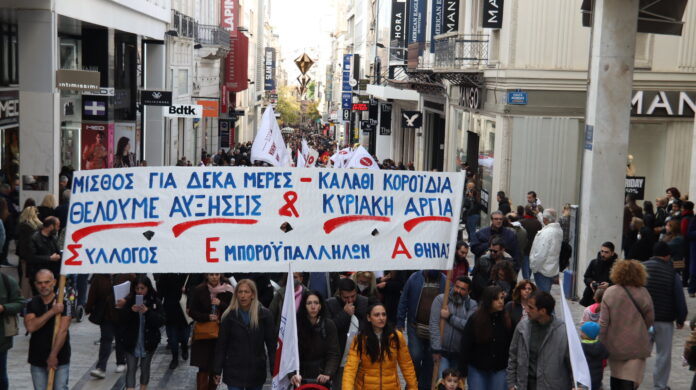 Agaisnt BlackFriday extreme working conditions for the profits of the bosses

On Sunday November 27 Commerce workers from all over Greece went on Strike against working on Sunday.

The decision to open shops on Sunday, November 27 was taken by the Government after demand of the big commerce chains, so as to have a continuous 4day of Sales starting on Black Friday till Cyber Monday.

Commerece Workers of Corfu also on #strike November 27 against working on Sundays for the profits of #BlackFriday #CyberMonday pic.twitter.com/es56hTyfqY

This situation, with shops working non stop and the workers under continuous pressure would lead to exhaustion, fatigue, accidents, and workers not being able to rest and be with their families.

The class unions called for militant response and organized successful strikes in Athens, Thessaloniki, Corfu and other big cities of Greece demanding

No Work on Sundays

Under the main slogan "STOP the employers’ crimes", "protection measures here and now" a...
Unions

Union of Tourism, Catering, Hotel Workers of Attica: Solidarity with the strike of WOLT food delivery workers in Cyprus

Our Trade Union expresses our solidarity and support to the WOLT food delivery workers...