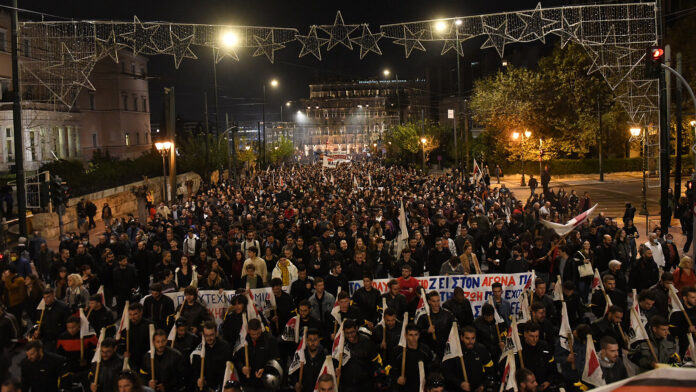 On November 17, the anniversary of the 1973 Polytechnic Uprising against the Military Dictatorship in Greece was honored with the most massive rallies of the last years, with dozens of thousands of demonstrators in Athens, Thessaloniki, Patras and many cities of Greece.

We fight against imperialism
Against exploitation
We will win! pic.twitter.com/9A4mELdgiq

The Athens rally demonstrated at the USA Embassy condemning the role of NATO-USA in support of the military dictatorship. At the same time the demonstration highlighted the demands of the people for no participation in the imperialist wars under the slogan

“NATO and Russia are dividing the Earth, with the blood of the people they are carving the borders- No Sacrifice for the imperialists”

“USA Murderers of the Peoples-Go Home”

Of special significance was the participation of army, navy and air force Soldiers in the demonstration denouncing the transformation of the Greek army into NATO’s mechanism. The people welcomed with warm applaud the demonstrating soldiers under the slogan “Soldiers are children of the people- They have no business outside our borders”

Have you seen this before?

No to NATO killers
No soldier outside Greek borders pic.twitter.com/Ub3JLKn2h3

In a failed attempt to intimidate the people, police helicopters were provocatively flying over the demonstration with their spotlights targeting the protesters. Their attempted was immediately ridiculed by PAME and the militants of the demonstration.

We are not intimidated
We simply have better lighting pic.twitter.com/Re82yCnGLG

Photos from other cities https://flic.kr/s/aHBqjAfHvx