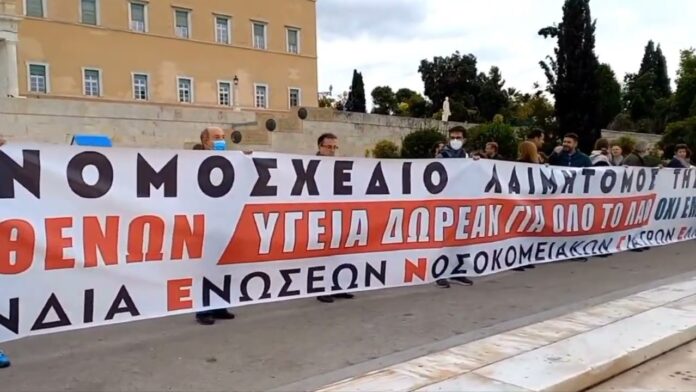 On Monday, November 28 Doctors and healthcare workers of Public Hospitals held their 1st day of Strike and protest in front of the Parliament rejecting the Government’s Bill that further privatizes Public Hospitals and Public Healthcare Services.

Doctors raised a big banner in front of the Parliament stating

STOP the theft from patients’ pockets

FREE healthcare for all the people

NOT a commodity & a privilege for a few”

NOW Withdraw the bill that butchers Public Healthcare
STOP the theft from patients pockets
FREE healthcare for all the people
NOT a commodity & a privilege for a few pic.twitter.com/p625xhNN7W

Protests were also organized in various hospitals and other cities

The largest Hospital of Greece has now an improved facade!

NO to the Bill that kills public hospitals#Healthcare is people's right
Not a commodity and a privilige of the few! pic.twitter.com/trFazg1ulZ

The President of OENGE stated

The Unions of Doctors, of Public Hospitals Workers and the class unions will escalate their struggle with new Strike Action on November 29 and December 1st

Under the main slogan "STOP the employers’ crimes", "protection measures here and now" a...
Unions

Union of Tourism, Catering, Hotel Workers of Attica: Solidarity with the strike of WOLT food delivery workers in Cyprus

Our Trade Union expresses our solidarity and support to the WOLT food delivery workers...