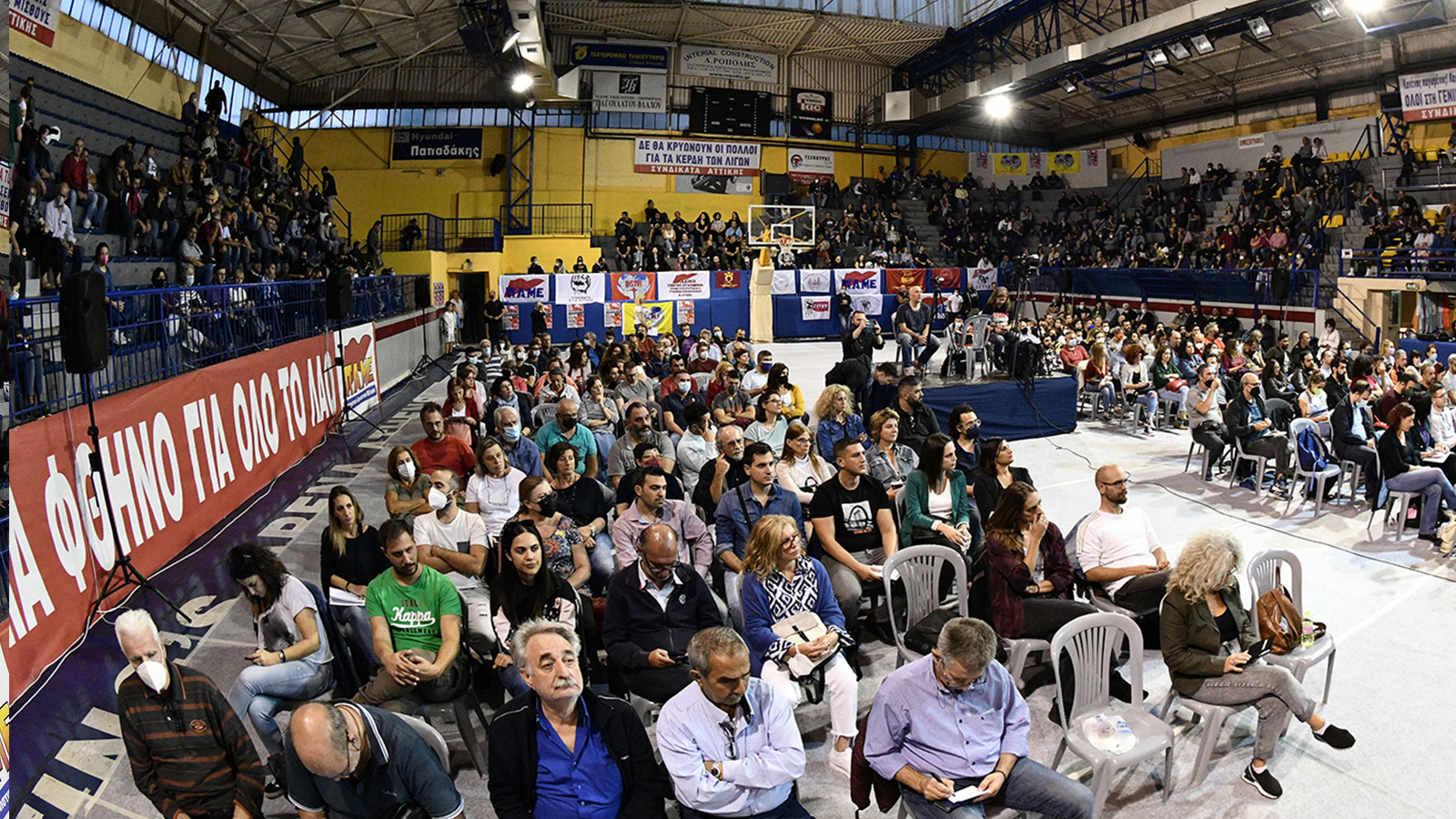 In Athens at the Sporting Arena, which was decorated with the banners of PAME, the trade unions and the WFTU, and with the central banner of the event giving the slogan “No waiting, no tolerance, everyone to the general strike on 9 November”, welcomed hundreds of trade union delegations from all sectors.

The meeting set the strike rally of November 9 in Athens to take place at 10.30 a.m. followed by a march to the Parliament. It was also decided that the unions will hold a new mobilization on Friday, October 7 at the new trial of Golden Dawn, demanding that all fascists be put in jail and condemning the unacceptable decisions and attempts to release them.

In a militant spirit the trade unionists discussed the steps made so far and confirmed their determination to take new steps in coordinating action, to intensify the joint struggle “in the fire” of the strike preparations. The aim is for November 9 to be a great moment that will push forward to new, more massive collective struggles of the workers, together with the self-employed, the small farmers and the youth, transforming the “difficult winter” for which the government, the bourgeois parties and big business are preparing the people, into a period of decisive uplifting struggle, an unyielding fight for wage increases and protection measures for workers’ income.

At the meeting took the floor trade unions and unionists who for months now have been fighting big battles in workplaces and sectors, organizing important struggles and putting “hard times” to the employers, such as the construction workers at the construction sites, the workers at the shipyards. Alongside them the workers from Malamatina, who, with their months of strong strike action, are setting an example of uncompromising struggle. The health workers, who after two and a half years of confrontation with the pandemic and the criminal government policy are fighting new battles, are preparing healthworkers’ strike on 20 October. Healthworkers, who recently succeeded with their militant interventions, imposing recruitment of staff in the “Aghia Sophia” Children’s Hospital.

Next to the trade unions that have been on the front line for years, new trade unions formed in various areas were also present, such as the National Association of Greek Singers, from which its president, Natassa Bofiliou, was present.

The introduction was made by G. Stefanakis, President of the Food – Tourism – Hotels Trade Union of Attica, followed by interventions from representatives of many other unions.

Important moment was, when the unionists received the messages from militant strikes of workers of Italy, France and Denmark, member of WFTU who also organize important strike actions in their countries. Big Union meeting took place also in Thessaloniki at the same time.

PAME expresses its solidarity with the workers of Italy and the USB for the...