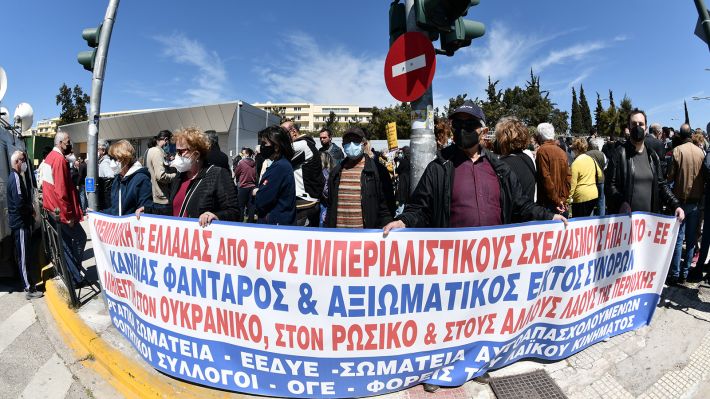 On Friday, April 8, Unions and Associations protested at the Defense Ministry of Greece against sending expeditionary army force, or military equipment for NATO battlegroups in Bulgaria.

The protested delivered a resolution to the Ministry stating

“The imperialist war in Ukraine between the US, NATO, the EU and Russia has absolutely nothing to do with the interests and needs of the Ukrainian people! It is an unjust war, which has to do with the rivalries over who will have the upper hand in the sharing of wealth-producing resources, the routes of energy and goods, the spheres of influence!

We denounce the ND government that is involving our country in the dangerous plans of the USA – NATO – EU. It is playing with the fire of war in the name of Greece’s contractual obligations within NATO and the EU. Our country has become an endless military base, but at the same time a magnet for retaliation, with US-NATO bases on the ground being on standby and participating in military operations. Highways, railroads, ports and civilian airports have been made available to US-NATO forces to contribute to these dangerous plans!

To cancel any shipment of military forces and equipment to Ukraine, Bulgaria or elsewhere!

Solidarity with the Ukrainian, the Russian and the other peoples of the region!”