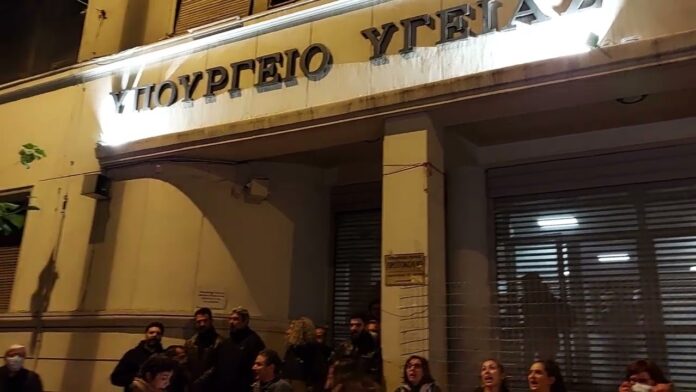 Doctors and Healthcare workers are on 2nd day of Strike on Tuesday, November 29 in defense of Free Public Healthcare, demanding the withdrawal of the Government’s Bill that privatizes Public Hospitals.

"Hands down from Public Hospitals"

Militant doctors early in the morning entered the Ministry of #healthcare and hung a banner against the Bill that privatises public hospitals
On #strike for public healthcare pic.twitter.com/a63bZ165Le

In the morning of November 29 public hospitals’ doctors staged a protest inside the Ministry of Healthcare and hung a banner calling in the Strike Actions and Demonstrations.

Our doctors are on #strike because they demand to be caregivers not salespersons!

“When a patient goes to the emergency room he waits ten hours, when a patient waits to be operated on he waits months, but within seconds the state sent three platoons of riot police to arrest 50 public hospital doctors…”

Under the immediate massive condemnation for the presence of the Police against the “Heroes” against the pandemic the Police Forces withdrew and allowed the doctors to exit the Ministry, who in militant spirit called the doctors and all the people to strengthen the fight against the policies that turn Healthcare into a commodity and a privilege for the few.

We fight for FREE PUBLIC HEALTHCARE
Hands down from people's right in #healthcare pic.twitter.com/vJtH5tZdFy