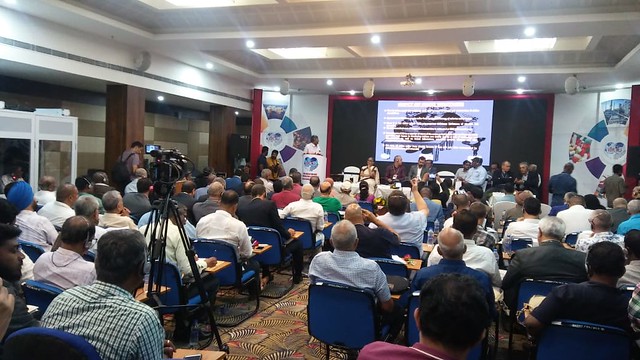 Firstly, we would like to express our condolences and solidarity to the victims of the recent floods, here in the beautiful area of Kerala. On behalf of the class trade unions of Greece, PAME, we welcome WFTU and the CITU, India’s class unions hosting the TUI ENERGY Conference of WFTU.

For us, India’s working movement is of particular importance both for its history and for its present and future, having now been recorded as the country that has recently made the largest strike in the history of the working movement with its WFTU forces at the forefront.
We also want to thank you because the class unions in India and the CITU were, and still are, firmly on the side of Greek workers.

Recently, governments and the media have spoken of Greece that it is supposedly ending the Memoranda and better days for the workers are coming. But we know that the situation is not improving for workers unless there is struggle. On the contrary, today’s Greek government, the so-called left-wing SYRIZA and the far right ANEL, continues the policy of striking workers’ rights, barbarous labor taxation, privatizations against working struggles. At the same time, while the Greek government imposes continuous cuts on the people, it is the second largest government in the world in military equipment for NATO, giving the US the basis for bombing other countries, cooperating and supporting the Israeli killer.

In this context, we are particularly concerned with the new phase of imperialist rivalry between US-NATO-EU, Russia, China, with examples of the imperialist intervention in Syria, the escalating attack against the heroic people of Palestine, etc. and the engagement of Greece is dangerous for the people. It turns out that a country’s mineral wealth, instead of contributing to the prosperity of its people, may end up condemning it to suffering, because a handful of multinationals are fighting for the biggest gains. Currently, the privatizations in the energy sector join. Whatever form they take, the workers and people’s households will be lost. The experience of similar “privatizations” in other EU countries like England, Germany, Belgium, Luxembourg, etc., as well as official statistics (Eurostat) show that gas and fuel prices in general have increased very high percentages at various or at all stages of the “liberation”. Indicatively, in Germany over a five-year period, the selling price has increased by 55% since the famous release. Apart from the prices, jobs, work conditions, health and safety measures are getting worse.

In the chemical industry we have the heroic struggles of the workers in the Eurodrip. The trade union, created by active workers, the frontrunners of the struggle, is a thorn in the eyes of employers. This explains the rogue attack of the employers towards the Administration of the Association. Here we have to mention the important initiative of the WFTU expressing the internationalist, classical solidarity to the workers of the multinational Rivulis – Eurodrip and their trade union’s  fight for their rights and against the terrorist dismissals and the call from the European Regional Office of the WfTU (EUROF) to the class unions in Europe, the members and friends of the World Federation οφ Trade Unionσ to move into action at the offices and factories of the company in Europe.

In the drug/pharmaceutical sector, companies blackmail workers to give up. This is because, thanks to class struggles, they have a limitation on the number of redundancies.
Apart from governments and employers, we also have to deal with the Industriall and ITUC forces in Greece. These trade unions not only supported the privatization of public utilities (electricity, gas, water, etc.), but also accepted the 22% reduction in basic salary. Indeed, the leaders of these unions were the only ones who went to work on the days of general strikes.

Under these circumstances, class unions in Greece that are rallying in PAME give the fight for the signing of Collective Agreements with the restoration of wages and rights that have been struck in the past years. It is a difficult process as we have to deal with a very negative situation, but also with weaknesses and obstacles.

But we also have our weapons. We know that without the constant, stable PAME struggle the situation would be much worse. We understand that we need to do much more.

We need trade unions that are massive, militant, organized and determined. That  rely  on the principles of class struggle, solidarity and internationalism. Trade Unions that will unite employees regardless of religion, color, sex or race, but as workers against the common enemy, business groups. We need trade unions to claim, to struggle, to win the rights of the working class one by one until their final victory. Such unions cannot accept the ideals of employers, nor applaud the  governments  that promise pro-development to the workers and profits to the capitalists. This logic led the workers to frustration, the departure from the struggle.

In this context, we believe it is important to strengthen TUI ENERGY of WFTU. Those of us who participated in the previous leadership believe we could have done more. However, the successful organization of the current conference fills us with optimism. We are optimistic about the success of the 17th World Trade Union Conference of WFTU  in Durban and its decisions, expressing the rise and strength of the World War II.

PAME’s trade unions in Energy, Pharmaceutics, Chemical Industry, we will do our best to make new steps in the meeting, co-operation and coordination of the energy trade unions

To Struggle for unified public organizations in the sectors of Energy and the pharmaceutical industry, with workers’ control and centralized planning for the satisfaction of the extended, contemporary needs of the people. A permanent and stable employment for all  workers.

Until the achievement of the task of the working class, the abolition of exploitation of man by man