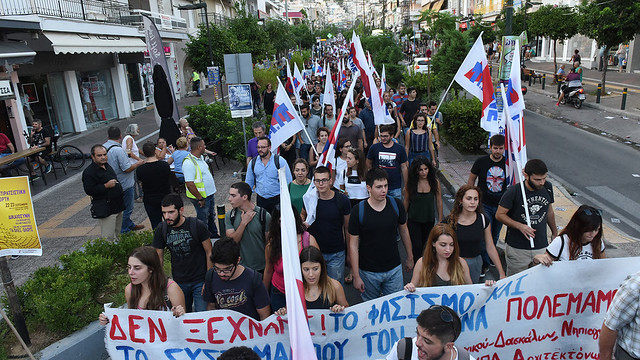 “In no Place, Never and Nowhere, Break the Fascists Everywhere”, was the slogan chanted by the unions of Piraeus and organizations, who held a massive, militant demonstration for the 5th anniversary since the murder of the antifascist Pavlos Fyssas by the NAZI Golden Dawn.

At the head of the demonstration was the Trade Union of Metal Workers of Attica and the Shipbuilding Industry of Greece. Then followed the blocks of other branches, students from Universities and schools with their banners saying: “We do not forget fascism and we fight against the system that cultivates it.” In the demonstration there was a massive participation of youth and students

“It’s been five years today, September 18th, since the day that Pavlos Fyssas was murdered by the Nazi criminal organization Golden Dawn.

We are here today to honor his memory and send again and again the message to all those who want to intimidate the working class so as to continue enjoying the wealth they have from our exploitation, we tell them their dream will never happen.